I was walking through the kitchen when I felt a pretty strong contraction and a small gush of fluid. Not a Hollywood floor spattering, shoe drenching gush; just a small wet your pants kind of gush.
Things moved very quickly from that point, and I might not be the best person to relay the events of that afternoon and evening as I really had little idea what was going on outside what my body was doing and feeling. My mind stopped processing information pretty quickly and my body went to work. I only had thoughts that ran through my mind but I could not voice or dwell on them. I was only in that moment facilitating what my body was doing and I couldn’t be anywhere else or think of much else. In fact I don’t believe my brain caught up to what my body had done until days later. However, here is what I do recall:

It was Monday, but Ben had come home early as we were both anticipating labor but simultaneously trying not to get our hopes to high and realizing labor still might be a week off.
I was eleven days passed due and had been experiencing all kinds of cramping and sharp pains and small contractions for weeks. This morning I was especially crampy and it had lasted the whole morning. but I tried not to put to much stock in those signs and just go about my business.
Ben’s work was slow and instead of taking on more tasks, he decided to come home. He hadn’t been home thirty minutes when I felt that first contraction in the kitchen.
I went to the bathroom to change my pants and Ben ran to get some litmus paper to test if it was amniotic fluid. I had another contraction on the toilet, a few more.
The litmus paper turned purple and Ben called Michele to tell her waters had broke and we were starting early labor.
I had more contractions on the toilet, then on a towel on the floor. I remember it feeling really hot all the sudden. Ben got off the phone and said Michele wanted us to go on a walk, He went looking for some gauze underwear Michele had told him to put on me for our walk. I sat in the bathroom annoyed at how long he was taking to look for the underwear and knowing I wasn’t going on a walk. I didn’t even want to get up off the bathroom floor, Plus I spent the morning pulling weeds; I didn’t need anymore exercise.
Finally Ben came back around (it was probably only a few minutes) I mentioned to him about how hot it was and could he turn down the AC. I also managed to say something which in my head sounded like “I am not going on a walk, I can walk around the house if I need to.” However Ben said later it was much more short and not a fully formed sentence. Ben sat with me and he tried to time some contractions, irregular, three to five minutes. I tried to prepare for the fact that this was early labor and I needed to be able to do this for another twelve to twenty four hours. I mentioned to Ben again about the heat, and he said it was the hottest room in the house cause there was no vent. Again I was a little annoyed at him for this. Then he brought me a cold wash cloth and immediately he became my savior, especially when he kept the next one in the freezer and brought it to me ice cold!

At some point the feeling of the contractions intensified. I can’t exactly describe how or when, but I remember being aware of it. Ben and I moved into our bedroom. I crawled in bed on my side, with a pillow between my legs. Ben sat next to me holding my hand and I hardly let him move from that spot. I remember being aware that Meg was on her way, she was sent out first thing to give me the antibiotic shot since I tested positive for group B strep. Ben kept thinking he heard Meg’s car pull up, and wanted to go check, but I wouldn’t let him from my side I just squeezed his hand harder.
The contractions came and went. They seize up suddenly like a charlie horse and I guess fear or a natural kind of tensing of the body would grip me at first. It wasn’t terribly painful, mainly just intense. I would think to myself what i had said for months, “This is OK, pain is OK, it’s what your body has to do and you should relax and allow it to do what it needs to.” The more and more I relaxed the better it got, the easier it was to just go with it. The contraction would come and I would grip Ben’s hand, which he said was the only way he knew i was having a contraction, other than that I stayed curled up in bed, eyes closed, breathing deeply, relaxing my body and allowing it to do what it needed to.

After Meg arrived she gave me the shot and examined me, she said I was two centimeters dilated. Again, I thought about how I should be ready for this to go on a long time and not be impatient. At some point, I motioned I needed to throw up, a trash can was brought, and my mango breakfast was gone. Genevieve showed up, when people walked in the room I didn’t say hi, or even look up. I remember thinking this seemed rude. Also around this time I started having a strange urge followed by a small gush of fluids and some bloody discharge. I thought it was just fluid leaking at the time, but the urges got stronger.
Ben continued to grip my hand and urge to me to drink water. They tried to get me to eat, I didn’t really feel like it but nibbled on some cheese. The midwife Assistants were having me turn to check the babies heartbeat. I remember being aware of some concern, Hearing Meg say something about a low tone, and then knowing it was my heartbeat and the placenta. At this point I was thinking the Hospital wouldn’t be such a bad option, people do it all the time, labor would be over instead of continuing indefinitely. Then I thought of getting in the car and I knew that wasn’t happening, I’d rather stay where I was. They asked if I would turn on my back for another examination. I made a hand gesture and Ben informed them I was having a contraction and to wait a minute. After the contraction I turned on my back. If I had a contraction on my back it seemed more difficult. I would bicycle my legs back and forth, it seemed moving more helped. Meg asked If I would allow a second examination by Genevieve to give a second opinion, I nodded. Then Meg was on the phone with Michele. The urges got stronger and Genevieve came around the other side of the bed to get in my face. They were all telling me to blow, and blowing with me. As I got the urge to bear down and push I began to blow, it seemed to slow down the urge. The urge came again and Genevieve said to open my eyes and “stay with us”. I opened my eyes and there she was starring right back at me. I locked eyes with her until the urge passed. If I kept my eyes closed my body was working hard, Genevieve knew that opening my eyes and blowing seemed to slow down the urge. Every time I opened my eyes and started blowing I met Genevieve’s gaze. I was easing my baby down the birth canal

I heard a couple car doors slam outside and in a moment Michele burst into the room, there was another woman with her, I found out later it was her sister Lisa also a midwife in training.
There was a lot of commotion, words exchanged, things being shuffled around the room. She asked for more light and someone opened the blinds. I was surprised by how much daylight was still out, it was earlier than I thought. As if it were no difficulty at all Michele all the sudden swung me around to face the side of the bed, I was on the edge of the bed and she was telling me I could push. Michele instructed me to push. I pushed, a kind of bearing down feeling that felt like an intense bowel. There was no terrible pain that seems expected from child birth, I didn’t even think of any pain, though Michele kept telling me to push more than it hurts. I pushed hard and as Michele instructed, I tried to keep the push going, until I couldn’t anymore, then rest and push again. I remember hearing to just get it over with, it will all be over with another push, you’re almost there. At one point Someone mentioned to Ben that he had to take a peak, you could see our baby’s face! That was the moment I was aware The baby’s face was coming first and that’s what there had been some commotion about earlier. My mind, however, was mainly on the task of keeping a push going. It was not too long before the pushing ended and the real commotion began. I don’t remember feeling relieved or like I could rest, it was more just one thing onto the next. I think I was in shock, still just watching and observing what happened around me, seeing more, but still not speaking, Except to ask Ben what we have, he peered over my shoulder to the slimy and purple little person that lay across my belly, ” a girl” he said. We had our Shea, she was in the world there in front of us, it was so surreal. I couldn’t peel my eyes away from her as Michele cleared her air passages, helped her breathe, and began to clean her and swaddle her to keep her warm. Even as I was being examined and stitched I only paid attention to Shae as she was being weighed and examined. I think my eyes were trying to help my brain process what had just happened, take in this new information and this new being in the world. Before we knew it all the commotion came suddenly to a halt and Michele and her assistant’s were gone, I know it happened more gradual but it seemed so fast. Ben and I were in shock as this perfect, tiny, little person lay sleeping in between us. It took us days to mentally process what had happened, that we had a beautiful daughter, that we were parents, and that life would never be the same again. 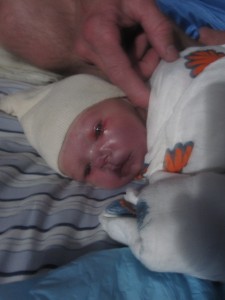