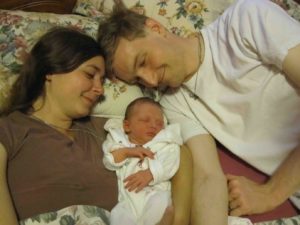 Shortly before my delivery date I was reading through a book on the Bradley Method of natural childbirth. I skimmed over one particular sentence without much thought: “It is rare to have a woman in real labor who doesn’t know she’s in real labor.” (It’s one of those sentences you realize in hindsight should have been a red flag)

In fact it is so rare that he doesn’t say another word about it in the entire book, and during our childbirth classes when we covered the possibility of precipitous birth it was only a short discussion with lots of reassurance that it doesn’t happen often for first-time mothers and a confident statement that if it does happen, chances are that things are going just fine. The odds that it would be my experience seemed remote since an expert didn’t present even the ghost of a what-if scenario and the classes went over it rather quickly without much detail.

My particular ordeal began just two hours after going to bed. We’d had a baby shower earlier that day and I was mentally exhausted, though quite amused at the guess-dates some of my family members had picked. Our due date was marked at the 24th and I was expecting our Bozatko(Little Darling) maybe a week later than that.

Around 1am I woke as usual to go to the restroom. I was very shocked when I got there and nothing happened. I waited a while and finally decided to go back to bed. I was just pulling the sheets up when I suddenly felt that maybe I really did have to go. Back I went, and this time after sitting a few minutes I finally had a bowel movement. But I noticed a tiny splotch of pink in my unmentionables. I said to myself, “I’ll ask Michelle about it on our Wednesday appointment…” which was four days away.

I was just returning to bed again when I felt the urge to turn around and go straight back to the bathroom. Once more I sat, feeling more and more uncomfortable. After a while I got down on my knees and tried an exercise one of the assistant midwives suggested for back pain. It helped after a while and my first impression was, “Good, that’s the end of it and I can finally get back to sleep!”

I realized about the same time that I was bleeding more profusely. Although this was worrying, I didn’t feel it was important enough to bother John about. Instead, because I was feeling that I shouldn’t get very far from the toilet, I laid down on one of the cushy rugs there in the bathroom for a while.

About that point it did cross my mind that I might be in labor, but I immediately dismissed the idea since I’d already estimated another ten to eighteen days for the event. Besides, I wasn’t experiencing any of the contraction pains I’d been expecting. In fact, the Bradley Method encouraged eating, walking and resting during early labor, so whether I was in labor or not, it was best to resume a normal schedule for the middle of the night. I returned to the bedroom with the full intention of trying to sleep until morning.

Since I had begun to sweat, I asked John to turn on the fan. No sooner had he sleepily reached out and flipped it on than I felt the urge to return to the bathroom. This time I was hit by the uncontrollable impulse to push. Instead of telling John right away, I convinced myself that this discomfort would pass and I would return to bed, then let him know about it in the morning.

For the next ten minutes I sat there, but by the third pushing episode I decided it was best to ask Michelle’s advice on the matter. So I called out, “John, can you call the midwife?”

There was a thump as his feet hit the floor and half a second later he was at the bathroom door. “Is everything okay?!”

I quickly outlined my recent experiences, downplaying the pushing part and he dialed Michelle’s number. She answered, sounding a bit tired (understandable, since it was 2:10am by this time) and I described the blood and that I felt as though my bladder was full even though it was empty and–

In the middle of my sentence I was hit by another wave, this one stronger than any of the others. I shoved the phone at John, braced my hands on my knees, closed my mouth and tried to suppress a groan.

Michelle’s voice came over, “Is she making that noise?”

“I’ll be right there! Get her on her left side on the floor!”

At last it finally hit me what was going on. My mind was in a complete muddle as thoughts ran through my head like, “But I haven’t had any contractions!” “Isn’t this supposed to take longer?” “Oh no! I only got three of the bags ready that Michelle wanted!” “But I just had the baby shower! I haven’t even washed the clothes for Bozatko yet…” It’s funny that they all seemed to hit me at the same time.

John got some of the towels we’d set aside for the birth and laid them on top of the thickest rug in the bathroom, because it was obvious I could not walk to the bedroom although it was less than ten feet from me. He got me a pillow and a cup of water before running into the guest room to get the prepped items for the birth. Then John ran downstairs, taking them three at a time, to unlock the front door and turn on some lights.

Meanwhile I was being hit by tremendous pushing frenzies and was trying very hard to make it known to the world. Five to ten minutes after Michelle told us she was on her way, my water broke in the middle of a strong push. The release of pressure was a blessing, but only until the next push. I could definitely tell Bozatko’s head was pressed against my nether regions by then, and I kept asking John where Michelle was.

He knelt by my side, holding my hand and trying to reassure me while I let out intermittent squawks of pain with every overwhelming push.

The moment Michelle arrived I felt relieved. She asked me questions I can’t recall, though I assume John answered them, then she asked if I’d like to change position. The idea of moving at all was unthinkable to me and I shook my head vigorously, but a minute or two later they got me to my feet and helped me into a position where Michelle was able to get me kneeling with knees apart as she supported me from the front.

This really got things moving and a very short time later Bozatko crowned–so far the worst pain I’d felt yet! Michelle was telling me I was almost there–just one more push–one more! At least a couple “one more”s later I felt that I couldn’t take anything else.

Distantly I heard Michelle telling John that as soon as the head came out, he was to help deliver the little one the rest of the way. But Bozatko decided that was too slow and came out all at once!

That’s when John eased me back onto the makeshift bed. There was someone wailing in Michelle’s hands and my face broke out into a helpless, motherly smile as the thought jolted through my brain: Bozatko really is a baby!

She laid the little one on my chest at 2:42am, and after a few moments I wanted to call our baby by name… The second we found out we were holding a little girl I fell into a long string of praises, every other word being “Philomena!” while John sat beside me smiling and stroking her head with its delicate covering of dark brown hair.

We moved to the bedroom and laid there with her between us, continuing to murmur soft words to our daughter. It was beautiful to be able to see and hold the one we’d been in love with for so many months.