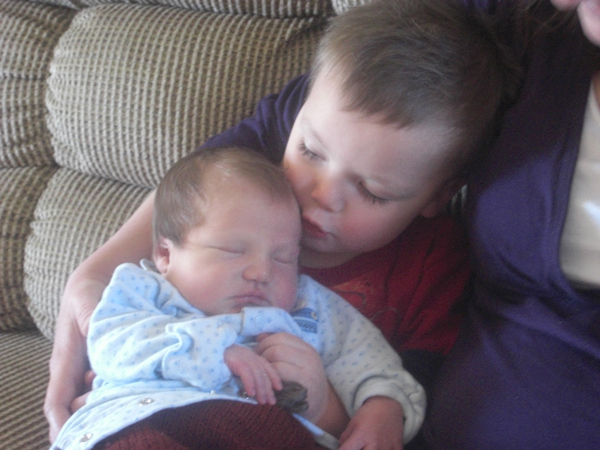 I was a couple days past my EDD. I was feeling great and the only reasons I felt rushed to have this baby were because my mom would be going back home in less than one week and everyone I know kept asking, “When are you going to have this baby?” “Are you still pregnant??” and so on. For several weeks I’d been having contractions, mostly in the evening that would either peter out or I’d just fall asleep. I was having contractions 10 minutes apart all day Saturday but I was still hesitant to believe I was in labor and to say anything to anyone except my husband. I scrubbed the kitchen floors, vacuumed, and walked around the pond & our neighborhood with my son (Jonah) and my mom in hopes that all the movement would help get things going (or at least keep me busy). I called Michele around 6 PM to tell her that I was pretty sure I was in early labor. A few hours later I finally decided to tell my mom. I really wanted to wait to tell her because I didn’t want to feel like I was a watched pot waiting to boil.
I got Jonah into my mom’s bed around 9PM. I called Michele again around 10-11 to let her know my contractions were stronger & closer together. Michele arrived sometime around 11 & said I was 3 cm dilated. She told me to try to sleep which wasn’t possible! Genevieve & Meg arrived. They brought in all their things and set up our bedroom for the birth. Then everyone left Nathaniel and I alone. We prayed together for a peaceful birth. I was feeling very excited about giving birth the way God intended. I tried to lay down but that was too uncomfortable. It felt really good to squat through contractions. I was really enjoying the stool Michele had placed at the foot of our bed.

Jonah woke up and I had a few strong contractions while laying with him and trying to get him back to sleep. Holding him was very peaceful and comforting. I was really enjoying my last moments with him as my only child. He fell asleep and I slipped away back to our bedroom.
Jonah woke up again around 2AM & came to our bed with my husband where they both fell asleep.

I drank lots of coconut water. I peed a lot. I groaned, squatted and swayed through contractions. Michele, Meg and Genevieve took turns to check on me, listen to the baby’s heartbeat and measure my blood pressure. A few times I felt bad thinking that I should have waited to call so they could be sleeping at their own homes.

I got into the bath around 3AM. I listened to Bob Dylan while everyone tried to sleep. I focused on opening up and surrendering to my contractions. I took tremendous comfort in realizing that God had designed my body for this process. Nathaniel came into check on me and I told him that I didn’t really know what I wanted, but I felt like I wanted him with me at that point. Before that I had really enjoyed being alone and just focusing on myself. I was starting to get to a place where I didn’t know if I wanted to be in the water, out of the water or what I needed or wanted. This was about the same point that I had lost control when I had been in the hospital with my son, but I still felt really peaceful. Michele came in around this time too and suggested I get out of the water.

I got out of the tub around 4AM and took a quick shower (because baths usually ick me out and I always feel the need to rinse off after). Everything still felt peaceful and slow but was beginning to intensify. I was dilated to 8 cm. Rachel’s head was still not engaged so Michele broke my water and had me push a few times to bring her down. I was a little nervous because I remembered how much the pain had intensified after the O.B. had broken my water while I was in labor with Jonah. After that the next few contractions felt really good in a way that is too difficult for me to describe. I could sense that they were more effective. They were also shorter. I walked up and down the stairs a few times. I continued squatting & started pushing a bit during contractions while Nathaniel rubbed my back and hips.

I started feeling the urge to push. I got examined I still had a lip of cervix & it was pushed back. I continued to squat and push. I had to pee and had some strong contractions on the toilet (I remember thinking how funny I must have looked/sounded because they made me burp!). Michele felt Rachel’s head and had me move closer to the bed saying, “It’s time to move if you don’t want to have this baby on the toilet!” Someone got my mom. I squatted by bed until Rachel crowned. Michele said, “Push more than it hurts!” which was very helpful advice! I started to panic inside a little but I could handle the sensation one contraction at a time and once I figured out how to push thru the pain it was much better. Michele had me lay on my back on the bed to deliver Rachel. I heard our midwives telling me I’d be holding my baby in a few minutes. After a few contractions I almost stopped believing them and got a little discouraged. I reached down and felt Rachel’s head sticking out a bit then got reenergized and started pushing with everything I had. I felt intense stinging and burning as Rachel‘s head came out (so *that‘s* why they call it the “ring of fire!). I felt her body come out and it felt so good! I remember saying, “Oh my God!” over and over. Her daddy helped catch her & she was placed on my belly right away. She was purple & started crying a few seconds later. It was 6:12 am. She was wrapped in a blanket and I thought she was a girl but was not sure because I only saw her for a second & didn’t have glasses on (yes my vision is that bad)! I heard Meg say “her hat” then got my glasses & saw for myself.

My mom brought Jonah in all sleepy-eyed. He shot spider webs at his new sister (which was his way of greeting other children). He seemed really interested for a few minutes then asked to watch Spiderman.

I had some excessive bleeding and was really grateful to get some medication which quickly helped. I was also really grateful to have some ibuprofen, because my stinging perineum was the most painful part of the whole experience. Thankfully I didn’t tear along my old episiotomy scar!
I spent the rest of the day admiring, nursing and snuggling with my baby in my very own bed. I would do it all over again in a heartbeat! I am so grateful to Michele, Meg and Genevieve for helping me (and Rachel!) to experience childbirth the way it is meant to be.