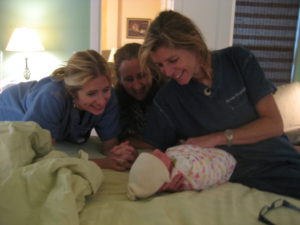 Well, not active labor, but the very beginning. I woke up at about 6:30am that Monday and had a little bloody show and some cramps. Great! I knew that it might still be awhile before birth, but I was hopeful now that pregnancy wouldn’t stretch out to 42 weeks – I wanted to avoid any induction “boot camp” and worries about the baby. I tried to go back to sleep and get more rest but was just too excited.

Bloody mucus continued throughout the day and gradually I became aware of a tightening in my belly. I went ahead and called Michele in the afternoon just so she would know what was going on. I told her I didn’t know if I was having contractions or not, and she said when I did, I would know for sure! and to simply exercise, eat a good dinner, and get some rest, since the baby could come the next day or the next week.

Since I had not actually felt any of the Braxton Hicks contractions to this point, feeling anything was a change. As well as feeling whatever form of contractions I was having, this was the first day I really felt huge, ponderous, hard to move around, and I sure hoped that wouldn’t go on for too much longer! So I went about the day impatiently trying to make sure everything was “ready” while at the same time trying to remain patient, since I knew that baby would come whenever baby was ready, whenever that might be.

Before the weekend, I had told baby that her due date would actually be a great day for the birth – that would give J and I the weekend to finish some shopping and cleaning, have an extra day to rest, then he could just stay home from work for the week if labor was established by Tuesday morning. Not to mention that I felt like seven (the due date) was a good number.

Anyway, I did feel fairly ready, much more so than if the baby had come a week or two earlier. The last thing I really wanted to finish was a mix of music for labor, which I finally got done late in the afternoon. We did go for another walk, which was very slow and short, since by evening I was having what we felt were definite contractions (although I didn’t mention that to the neighbors with whom we chatted!).

I don’t remember dinner. I do remember that my stomach felt a little upset, although I didn’t connect that with labor at the time. I sat on the big red ball so I could move and stretch through contractions before finally going to bed. I hoped that I would be able to have a good night of rest while my body continued its birth preparations. Well, at least one of those things happened! I dozed through contractions for a few hours until about 12:30am when I realized sleep was no longer possible. J also got up with me and around 1:30am began timing contractions. Although they were short – only 15-30 seconds (at least the part I could feel) – they were only three minutes apart. Also, my stomach felt even worse and I had already thrown up. The nausea was more unpleasant, if less painful, than any of the contractions!

So by 2am we went ahead and called Michele. (when J told her I had nausea and vomiting, she said “Aww, we’re having a baby!”) She sent Meg out to see how far along I was. I was relieved to find out that I was at about 4cm and that I hadn’t called them out in the stormy early morning for nothing. (Yes, stormy – a tropical storm in fact. by the time we checked the rain gauge it was overflowing.) Soon after that I got into the bathtub – while it felt nice to be in the water, I don’t think it had much impact on how the contractions felt. But either I felt good enough there or climbing out of the deep tub was just too much trouble, because apparently I was there for about an hour.

My sense of time from here on was clearly distorted; I know certain things happened but am unclear on when they happened and in what order. I know that everyone (Michele, Meg, Genevieve) arrived within a couple of hours. I know that I labored in various positions and places – in the tub, on the big red ball, on my knees with a giant stack of pillows under my chest, on the toilet, lying on my side… Michele helped my waters to break – I was amazed at the gush of fluid, and that it continued to gush with each contraction for quite awhile. Throughout everything, baby’s heartbeat was strong and reassuring.

During a break, I saw the piano and played a little Bach, which was relaxing, and this also reminded me I had a music mix which was then started playing. I found that hearing songs that were energetic as well as those that were calming was helpful, and I just tuned out anything that wasn’t helping me.

Actually, I tuned out a lot of things throughout labor, turning inward. I kept my eyes closed and focused on my body and my breath, on relaxing as much as possible. J was always there with a hand on me and that helped immensely. This plus rest time between contractions meant that they were quite manageable. In fact for much of labor I felt quite good between contractions. To get through them I did vocalize continuously with my breathing. The nausea and throwing up again (and again) was worse. I was able to drink plenty of liquids but eating? no way, although food was offered.

I was most uncomfortable when Michele was trying to help the baby move to become more anterior, and it felt like that went on forever, but finally, I guess everyone decided that baby was happy where she was and staying put. After that I was lying on my side and that was the most painful position but it took me a long time to have the energy to move. Once I finally did, contractions almost stopped – rest time before pushing – but I was ready to keep going! so I was sent walking (waddling!) and high-stepping around the house, squatting whenever a contraction hit.

I learned how to push, but never really felt aware of a strong urge to push; in fact I felt like I wanted stronger contractions to provide more help. Perhaps if I hadn’t been trying to push already, I would have been aware that I needed to, but no uncontrollable force took over. I found this phase to be extremely hard work but was not aware of pain – I wanted to meet my baby and that was more important than anything else! so the limiting factors were really my breath and my strength. I vaguely remember everyone cheering and chanting encouragement at me – when someone said push through the pain, I thought what are they talking about? and to be honest I tuned out much of this too. I just needed to know that my pushing efforts were achieving something no matter how slowly, and beyond that there wasn’t room in my conscious awareness for much else. Apparently I pushed for about 1.5 hours; still having no sense of time, I would not have guessed, although it did feel slow to me.

Finally, a head! then after that the rest of the body came out quickly. Wow! J was right there to catch our new baby, and then she was placed on my belly. She and I were now both present, both with our eyes open, my focus still on baby but now she was here! She was alert but calm, looking around, and absolutely beautiful!

Of course plenty more happened that afternoon – delivering the placenta (easy, whew!); baby being weighed, measured, and so on; my getting stitches; but my first look at her is the most striking memory. Later on I was amazed by her instinctive sucking as I learned to nurse her. After birth, thankfully I was no longer nauseous, I was quite hungry! but the midwives had ordered pizza so mother and daughter both got to have a good meal.

Once everything was cleaned up, it was just the three of us 🙂 although the first diaper change was comical (the first for all involved). The first week was very special for us as a family. Every day we are so happy Suzannah is our baby and we continue to be in awe of her beauty and perfection.

why homebirth?
(not part of birth story but perhaps helpful in case anyone is curious)

The birth story simply focuses on the birth. This will provide some background and additional information. Suzannah’s birth was planned as a natural birth at home, attended by a midwife. There are countless reasons for this, and the number of reasons grew as I read and researched. Ultimately, we felt that homebirth was the safest and best choice for our baby. I have always gravitated toward doing things “naturally”; the first time I really paid attention to the birth process was in a college course on medical anthropology. I discovered that typical hospital birth procedures are not designed for the mother and baby – they are designed for efficiency of hospital staff and minimizing liability. They are not designed to honor and facilitate the natural process of birth. Sure, much depends on the particular hospital, and improvements have been made, but I wanted to save all my energy for giving birth, and not using it to argue with some nurse I had never met about why I would not be having an IV. or an epidural. or a monitor. or remain in bed. etc. etc. In a hospital there is likely to be a cascade of interventions that, absent a clear reason for intervening, are likely to slow labor and even cause other problems, with a higher risk for major surgery. And merely going to the hospital is the first step down that path. Animals choose to give birth where they feel comfortable, safe, private…we are animals too. I believe labor and birth proceeded better and were less painful because I was in the comfort of my own home, surrounded only by people I knew and trusted. As well as avoiding many interventions, this allowed me to more easily give birth without drugs – while many babies are born safely without drugs, there are effects on the baby, and so for her sake, I wanted to avoid drugs if at all possible. Speaking of drugs, I have frequently heard “did it hurt?” or “I couldn’t do that, it would hurt too much!”. Well, for me, I simply considered other things to be of more importance, and while it did hurt, the pain was irrelevant. Other physical activities I have done hurt too, like running a marathon or climbing a mountain, but would I choose to avoid that pain and miss the experience? as I chose for birth, no. Something else I have read frequently in birth stories is “I wish I had known about homebirth sooner!” and that is why I am writing this. I want people to know that it IS an option, not necessarily for everyone, but I encourage everyone to become informed about birth and figure out what is best for them, instead of having a choice made for them by our culture.